I happened upon the women’s movement rather by default. Years ago, a young Turkish colleague mentioned that she admired me as she learned so much from me. When I asked her just what she meant by that, she said, ‘you walk home in the evenings by yourself.’ I never thought that would be a reason to be admired. That was in Eskisehir, central Turkey, in the early 1990’s.

With visions transmitted on an old fashioned movie reel, I saw images of my grandmother, one of the first female policewomen in New York City, marching for women’s rights nearly 100 years ago. Whether she did actually marched or not, I will never know, but right in front of my face was the reality that so many others needed role models, needed to see the examples of others for them to take their own steps to move forward. After all, I had benefitted from plenty of positive examples myself.

When I moved to Istanbul, it seemed that the easiest entry to civil society was through the women’s movement. It was a great entry for me, first of all, for friendship, secondly as a learning experience, and thirdly, as a concrete venue by which to apply my beliefs of participation and being part of doing something for others, so the quality of their lives had the potential to go up a notch or two. I immersed myself: volunteering, being part of a women’s cooperative, learning and teaching self-defense (really empowerment), even attending the United Nation’s Beijing + 5 meeting in NYC as a representative of Turkish civil society.

Then I got a new job, an opportunity to set up an entire program for civic participation, and any time I may have had to give to the women’s movement was eaten up by time spent working on a larger picture. Or so I thought. In reality, I had become disillusioned, frustrated. There was so much negative talk, so much talk about others not having enough of a feminist perspective, and not nearly enough talk, never mind action, regarding women who may benefit from opportunities to be someone other than what tradition dictated.

After a few years, however, I realized that I missed the solidarity and support of working with women for women, even if we weren’t all necessarily of the same mind set. So a friend of mine and I became the sole volunteers for a shelter for trafficked women. It was an intense re-entry, but a great one in that I was reminded that my comfortable life was not even on the radar for too many women.

It took a few more years before I ventured on the journey to create the garbage ladies, çöp(m)adam, which really came to be as a result of frustration at what I was not able to achieve through that program for civic participation, not just my desire to be part of women’s empowerment. This is part of my belief that concrete action makes a difference. Marching on the streets can play a role, but there must be something to do when the protests are over.

So, when another woman, who also seems to have it made, contacted us to see about the possibilities of working together, I was pleasantly surprised. Colette Sol, who has her own leather shoe and boot factory, also wanted to be part of empowering women, to play an active role in creating opportunities for women where they did not exist, or were not seen, before. Last weekend, Colette came all the way from Zurich, stopped in Istanbul to grab her factory manager, and arrived at my house at 01:30 Sunday morning. She was ever so apologetic, I was ever so honored. We shared wine, laughs, and an enthusiasm that comes from meeting with another person whose energy that is similar to your own. Together we spent the better part of the nicest Sunday so far this year, inside our workshop, as her right-hand man, Huseyin, ever so patiently worked with some of our ladies, as they learned and perfected a technique for an order Colette hoped to place with us. We know we can move forward only if we constantly have new ideas and new products, as well as new customers. It is so refreshing to work with people who understand what it is we are about and make the effort to come and visit us in person. 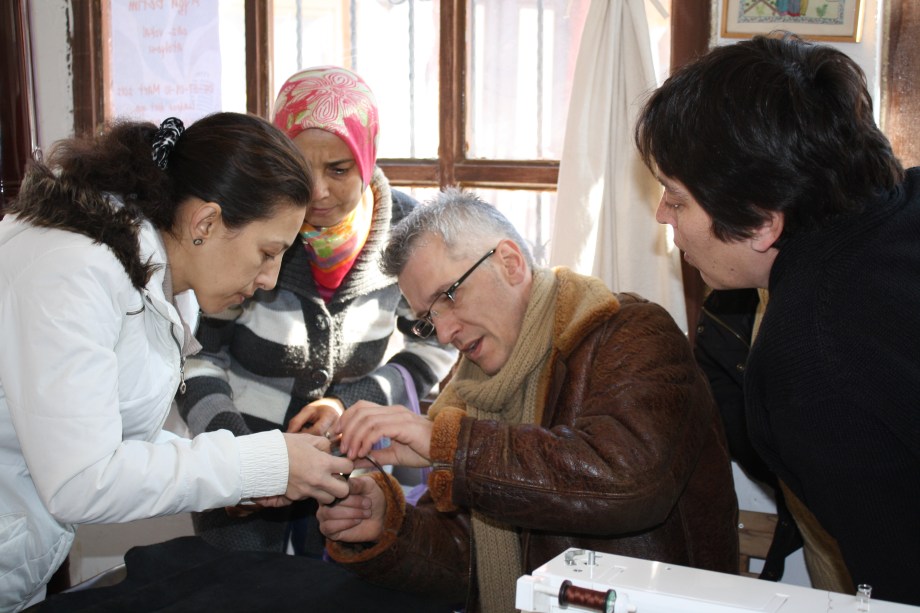 On March 8th, is, International Women’s Day, I make myself take time out and pay homage to those who have come before us as well as others who are also working to empower women. In Turkey, women are still categorized with handicapped and children; in addition to marches, panels and presentations, March 8th is often celebrated with sales on make-up and sales on shoes and clothes. Not to take away from the fun of accessories and feeling like you really look good, March 8th is really a time to say, ‘Yes I can, and I can be part of making sure that many other women, should they wish, can as well,’ be it here in Turkey, below in Afghanistan, or anywhere else.

I will not be marching but I will be speaking; neither protests nor words are enough to make a difference, actions do that. I am proud of all the women who work with çöp(m)adam and are themselves role models for so many others.

This is not just another day in the life of the garbage ladies; it is another verification of belief in ourselves and an opportunity to thank all, women and men, who believe in us to believe in ourselves.