It’s Santa Claus but not really – it’s one of the lottery ticket sellers dressed up as Father Christmas but without the belly. The fake Christmas trees with plastic ornaments that are more and more prevalent each year are not for taking home to place presents under to be opened on December 25, but for New Year’s Eve. I used to try and explain the difference but I gave up as I reminded myself that so much of how I grew up celebrating was quite a mix of tradition, religion and sales opportunities.

New Year’s Eve, if celebrated, is often spent at home with family and friends, or with some degree of partying. There are kisses at midnight and the belief that whatever it is you are doing as one calendar turns into another is what you will be doing for the rest of that year. The odds are increased if you are wearing new red underwear. 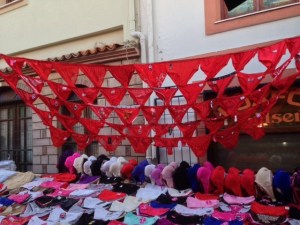 I asked our ladies to make some stockings and they asked me to replace the fairy lights that had burned out last year. We also made a cool cat, dressed up for her own New Year’s Eve party, complete with a party bag. 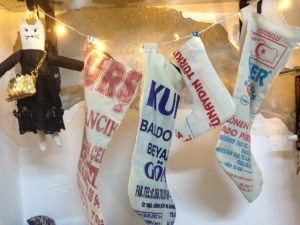 For me, no matter what the holidays are called, it is a time to share. The cats in the workshop were the only ones whose eyes did not well up when we received a holiday cake for ‘the garbage ladies’ family’ from one of our customers. 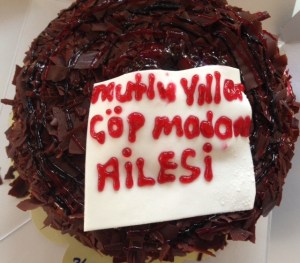 Very happy new year’s greetings to all of you from all of us. And may you have a wonderful year, red underwear or not.

Another year in the life of the garbage ladies.