We moved our workshop from one corner of the intersection to the other, in part because the new space is brighter, in part because it is right next door to the tea house, where Suat and Mustafa are so good to us, in part as it has a gorgeous entrance, in part because one of our former landlords was an unlovable grump. The biggest reason, really, is so we could hear one of the local characters call out ‘Mashallah, mashallah,’ as he walks his goat around the neighborhood, pausing at the café for all to admire the animal and for him to inquire after everyone’s health and wish everyone well. As soon as we completed the move however, he sold the goat. Ah well, we are still pleased with our move, mashallah… 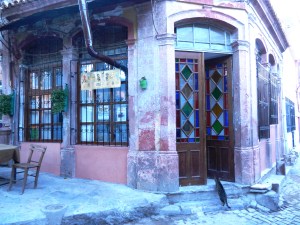 I had hoped to use the recent religious holiday, the Abraham-son-sheep one, to clean cobwebs and clutter out of my own living space. I made it through the pantry and much of the garden before my erstwhile stonemason let me know that he and one of his workers would be able to help me move the last two days of the holiday. It’s my time off but their holiday, their belief, so I couldn’t very well say ‘no,’ especially as I was counting on them to move the heavy and bulky bits. 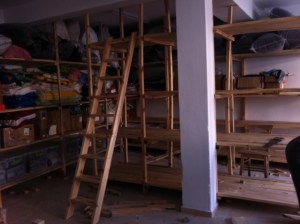 What a lot of trash (sic) – what a lot of materials we have! Even though we threw out much of the industrial felt that was donated, transportation from our side, there must be about a ton of the felt left. We still have at least 450 kilos of wool fabric scraps; thousands of metal bottle caps; hundreds of washed and ironed flour sacks; several tons of bobbins for instant soup and tea; over a ton of advertising banners; more than a years’ supply of magazines and paper and what seems like millions of buttons. There were also the new bits to move, albeit just across the street: thousands of zippers, boxes and boxed of embroidery and sewing thread. More work tables and chairs than we need on a regular basis, one industrial sewing machine, three standard machines, two LARGE cabinets, and then existing shelves as well as those to be constructed. The move was, after all, in addition to closer proximity to the goat, an opportunity to be more organized in my never ending attempt to be more efficient in this reality that is focused more on inter-personal relationships and maintaining the status quo than on efficiency. 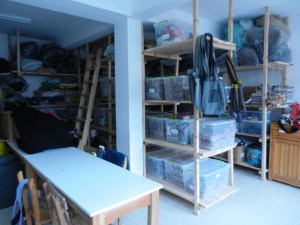 Though I was sorry to see my free-time go to the task of moving and lifting, I wanted to accomplish as much as possible before our ladies came back from the official holiday. The time off was not only well-deserved, it was a legal holiday across the country. I was also being more of a boss, making decisions for all of us without consulting anyone else. We had made due with the space we had before; now we had the opportunity to be proactively organized. I was also going to channel some of the envy I feel for friends’ workshops to make ours more business and less ad-hoc workshop like. 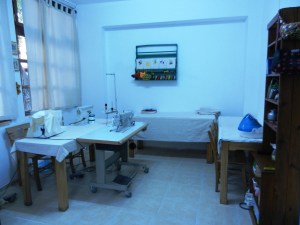 There was still plenty to do when our ladies came back. I am not sure who was more tired by the whole process, me or them. I was more top-down than I usually am, insisting that all that could be put away be put away but also labeled, throwing out materials that had been put on various storage shelves as we didn’t know what to do with them. All in all, it was an exercise in opportunity, making the most of a new venue, creating a new structure and not allowing the familiar just because it was that, familiar. If it worked, fine. But most everything was newly organized. Our ladies were ever so patient, and admitted that the new workshop is really, really nice. I was thrilled that they were happy to scrub away the left-over dust and dirt from years of being abandoned and over a month of construction, taking ownership of this workshop just as they had grown to take ownership of the one we had first occupied. 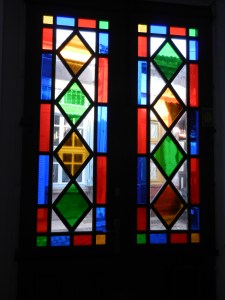 Our male neighbors all came over to congratulate us: the fellow from the antique shop, the owner of the feed shop, the guys from the bakery down the road, the barber, the glass-man, the machinist, and of course Suat and Mustafa from the tea-house. We smiled quietly, knowing that much of our comfort level is because they accept us. We were also glowing a bit inside as we had moved just a little closer to the male-dominated territory. Not only were we accepted, but we felt we were embraced.
Another step forward in the life of the garage ladies.